Home> One Chapter More> The Girl Before

The Girl Before by JP Delaney 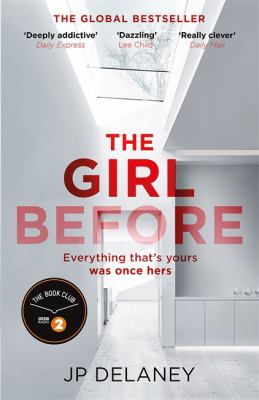 On reading this novel, I became instantly aware of subtle similarities with the E.L James' 'Fifty Shades' series also a seemingly clinical narration expressing dark themes of obsession, possession and mystery in a detached manner, yet Delaney also manages to deliver increasing depth and suspense with every turn of the page. The novel moves back and forth between the story of Emma (the past) and Jane (the present). When Jane finds a modern, highly-technological rental property (One Folgate Street) which seems too good to be true, she quick realises that what she is signing up to isn't a straightforward lease. With an extremely demanding landlord monitoring her every move through technological devices as part of an architectural experiment, Jane begins to feel claustrophobic and out of her depth; even more so when she learns about the ill fate of the previous tenant (Emma) and the unmistakeable parallels in their stories. Admittedly I did initially find the story slow-paced and lacking depth of character, yet as the characters' stories became more sinister as well as more similar, I realised how quickly and how far I had been drawn in. As the novel progresses, what we know is that Emma doesn't survive One Folgate Street, we know that the circumstances surrounding her death are getting closer to being revealed with each short chapter, and we are also asking ourselves whether Jane is destined for the same fate as their stories are merging in so many ways. The conclusion proved to be satisfying, tying up loose ends and making me want to re-read the whole book to look for 'clues' that I had missed along the way.