Elizabeth is Missing by Emma Healy 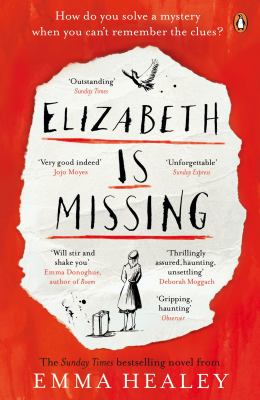 This is the mystery of Maud’s missing friend Elizabeth. Maud has dementia, she cannot remember having made a cup of tea or that her daughter is in the next room but she knows her friend is missing because the notes she has left for herself tell her so. Her frequently exasperated daughter Helen constantly reassures her mother that Elizabeth is not missing but a crucially sad event from Maud’s childhood recalled vividly throughout the story, make Maud unwilling to let her friends disappearance go quietly away.

This book is a mystery though it defies the genre by veering away from established frameworks of conventional mysteries and unfolds. Through a very human story and the eyes and memories of one woman’s life lived with a latterly developing illness.

Elizabeth is Missing isn’t a book I would normally read, I like my mysteries set in exotic locations with rich food with intriguing odd main characters and smart dialogue, so a novel set in suburbia with a plainly drawn older lady as the protagonist didn’t initially grab me but being a Costa Award winner did though, so I thought I’d give it a go, I wasn’t disappointed.

The opening chapter with Maud’s inner dialogue and the vividly accurate descriptions of the everyday routines and strife arising from dementia are gently humorous without ever being demeaning or frustrating to the reader as they are to everyone that has contact with Maud. Maud’s observations always lightened the plot that I was becoming impatient to see resolved and doubted her illness would allow her to do so, as the story unfolds the real mystery builds until the unexpected twist at the end and a seventy year old mystery that everyone but Maud had forgotten about.

Elizabeth is Missing, is so authentic and well written that I was entirely engrossed in the story and satisfied at the end of the book. This is a complex tale told in a simple accessible style that rarely loses pace very much in the style of Eleanor Oliphant but uniquely out on its own.