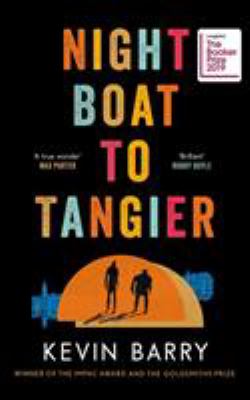 This title is a bit of a marmite book! The coarseness of the language and crudity of some topics touched on may be off-putting initially but if you can overcome that it is possible to appreciate the brilliance that is Kevin Barry's writing. Reasonably short and with more than a nod to Beckett's Waiting for Godot, the two main characters, in their 50's, drug dealers from Cork, have been searching for a daughter of one of them and are waiting for the Night boat from Tangiers. They are sure that she will be taking the boat and are determined to find her. As they wait they ruminate on their joint past and we learn about their history, their loves and losses, their criminal past and the tragic relationships they have both had with Dilly, the daughter, which ultimately caused her to run away.

The lyrical prose, which is best read with a strong Cork accent in mind, is coarse and sparse but extremely evocative and the use of short sentences at times gives it the feeling of a script. The lack of punctuation marks to distinguish dialogue is cleverly done, using spacing on the page to advantage.

There are comic moments as well as violence in their reminiscences and some of the descriptive passages are breath taking in their brilliance, their observations evoking such visual impact that they need to be read again and again to be fully appreciated. Chapter 8 was specially noted by one of the group members as one to be read again for full appreciation. By the end of the book we feel that we know both men well, as their characters are so well developed and we are eager for a more conclusive ending for them. That said, the group were generally satisfied with the way it ended, for Dilly's sake and all those who finished the book were positive in their appreciation of this extraordinary novel.