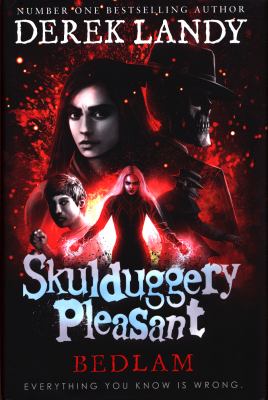 Skulduggery Pleasant:Bedlam, the twelfth book of Derek Landy's hit series truly gets to the root of why this is such a beloved series, covering everything from incredible fight sequences, diabolical actions against humanity, your favourite characters be put through unimaginable pain, world building and that trademark Skulduggery humour the book truly is required reading for all fans of the series and to those who aren't fans I would encourage you to read it anyway because you will be once it's over (although I would suggest you start at the beginning not book twelve).

The book delves deeper than ever before into the relationships of certain characters both existing and new leaving you asking 'Who's really the villain here?'. If, like me, you grew up reading these books you'll feel as though you've stepped back into your old home and the only way you'll leave is kicking and screaming.

That said I won't lie, it's not the greatest book ever written, it probably isn't the best in the series (Last stand of Dead Men) but it is an incredibly good time. While it is, in fairness, a bit of a slow start it all kicks off like a gunshot and doesn't stop until the last word (and I do mean last). This book will have you hooked like no other with gripping dialogue and jaw dropping reveals which will leave you screaming to the wind and cursing the name of Derek Landy, for truly he is the villain of this story.